A Mashpi glass frog (Hyalinobatrachium mashpi) observed on a leaf in the Andes region of Ecuador. H. mashpi have similar color patterns (left), transparent abdomens (center), and exhibit similar behavioral patterns—namely extended parental care—like other members of its genus. On the right, a male Mashpi glass frog protects its eggs until they hatch as tadpoles. Photos by Lucas Bustamante and Jaime Culebras.

Like other members of the genus, H. mashpi have transparent abdomens that offer a glimpse of their internal organs. Video by Becca Brunner.

An international team of biologists and researchers have identified two new species of endangered glass frogs near active mining areas in the Andes, discoveries they say highlight the region’s “cryptic diversity” while simultaneously underscoring the importance of conservation in a global hotspot for biodiversity.

But bioacoustic analysis of Mashpi glass frog’s unique call and improvements to DNA sequencing helped researchers differentiate the species from their closest relatives. Their findings are outlined in a new article in PeerJ, an open-access journal of biological sciences, and conclude more than seven years of observation and comparative analysis of species across Central and South America.

The Mashpi glass frog (A) and Nouns' glass frog (B) exhibit morphological similarities to closely related members of the same genus (C, D, E and F). Researchers say these similarities are an example of "cryptic diversity" in the Andes. Photos by Jaime Culebras (A, D, E, F), Jose Vieira (B), and Luis Coloma (C).

More than 1,000 amphibian species—including 83 members of the Centrolenidae family—are found scattered across the Andes, a majority of which can only be found in narrow mountain ranges and river valleys that dot the terrain.

“A lot of these sites are incredibly remote, which is one of the reasons why we were able to discover new species,” explained Becca Brunner, a PhD candidate in environmental science, policy, and management and one of the study’s first authors. “You can walk just a couple of kilometers over a ridge and find a different community of frogs than where you started.”

To identify H. mashpi as distinct, researchers analyzed its vocalizations for differences in frequency, duration, and timing. The species call (displayed in purple) does not overlap with vocalizations from other species. Graphic and recording courtesy of Becca Brunner

Biologists originally confused H. mashpi with H. valerioi, a lowland glass frog, due to their strong physical resemblance. The frogs were basically indistinguishable, but by comparing comprehensive DNA samples and call recordings with similar species in Central America, Colombia, and other areas of Ecuador, Brunner and Guayasamín were able to discern that the similar individuals were actually two unique species.

Brunner, who studies amphibian vocalizations and bioacoustics, was able to analyze recorded H. mashpi calls to determine differences in frequency, duration, and timing.

“When you analyze the different call characteristics of other glass frogs, you can tell that the calls of H. mashpi don’t overlap,” Brunner said. “In other words, its call is the most distinguishing characteristic for the species.”

Researchers were unable to record H. nouns calls during their fieldwork due to issues accessing their habitat. Both species are typically found guarding fertilized egg clutches on the underside of leaves high above rivers. Subsequent DNA analysis revealed a substantial difference between the genetic makeup of H. mashpi and H. nouns.

“The problem is not finding new species, the real challenge is having the time and resources to describe them,” Guayasamín said. “Taxonomists are an endangered kind of scientist.”

A Call for Conversation 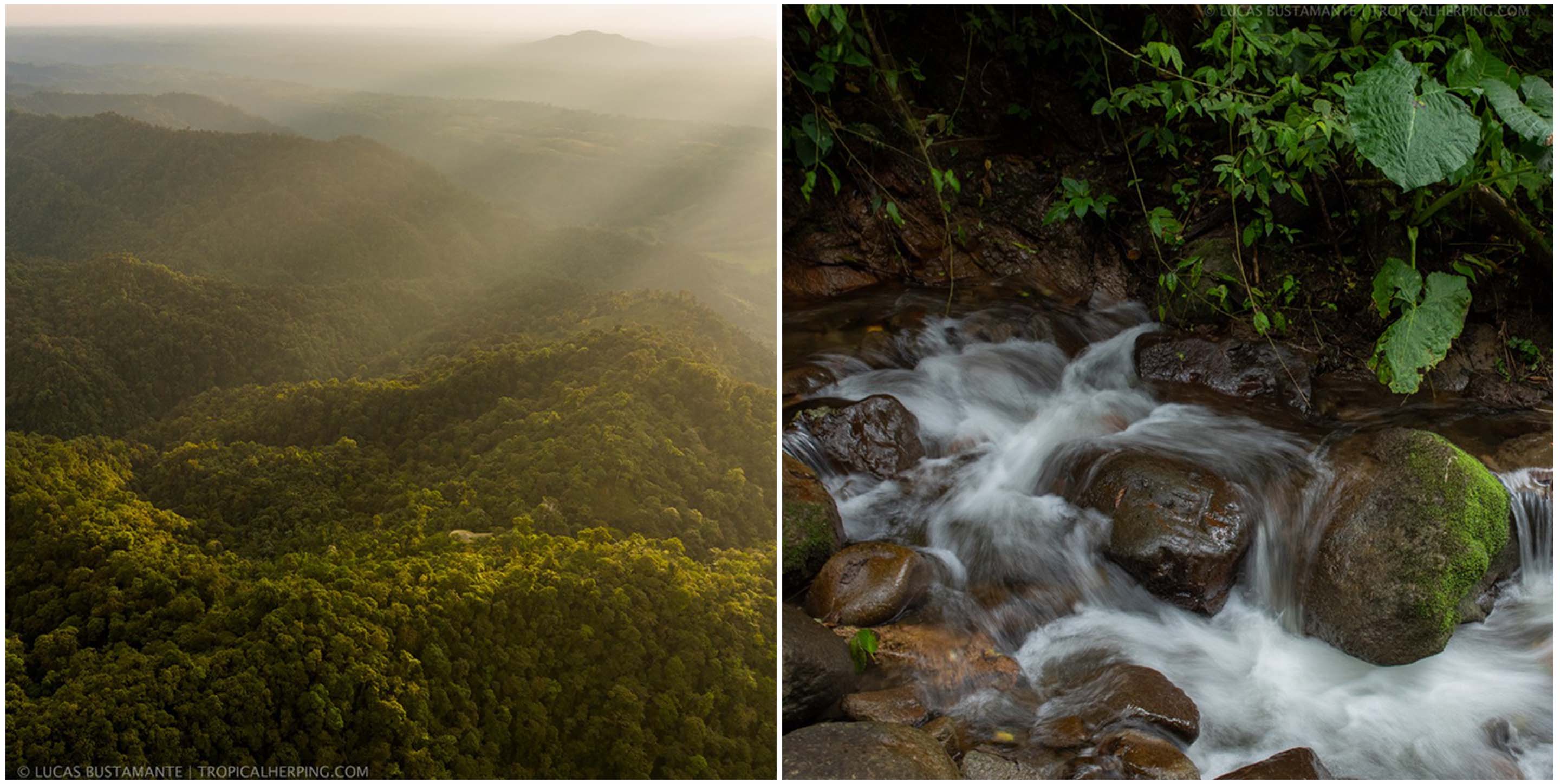 Brunner and Guayasamín consider the Andes hotspots for biodiversity. The dense cloud forests (left) and flowing rivers (right) that dot the terrain are home to hundreds of endemic species that can only be found in narrow regions. Photo by Lucas Bustamante.

The researchers are concerned that the Ecuadorian government’s embrace of explorative and extractive mining will threaten Andean biodiversity. Due to the associated threat of population decline or extinction, Brunner and Guayasamin recommend listing both species as “Endangered” under guidelines established by the International Union for Conservation of Nature.

Both H. mashpi and H. nouns are located in forest regions that have suffered agriculture-related deforestation over the past decades. H. nouns were observed in areas with active mining operations, while H. mashpi was observed in areas adjacent to existing mining leases.

“The few remaining patches are now under the pressure of mining activities, which are highly polluting and have the opposition of numerous local communities,” Guayasamín said.

A frog’s ability to breathe underwater through cutaneous respiration—a process where gas exchange occurs across the skin rather than lungs or gills—makes them highly vulnerable to water-related pollution and habitat destruction. Brunner cautioned that the narrow distribution of species in the Andes makes H. mashpi and H. nouns incredibly susceptible to disruption.

“If a mining company came in and destroyed the few streams where we know these frogs exist, that's probably extinction for the species,” Brunner said. Deforestation in the Tayra Reserve (pictured) has biologists concerned that subsequent habitat loss may further harm H. mashpi and H. nouns. Both species are located in or near active mining sites that threaten the natural environment. Photo by Jaime Culebras.

Ecuador made global headlines in 2008 by adopting a new constitution that established the right for “Pachamama,” or Mother Earth, to exist and to “maintain and regenerate its cycles, structure, functions and evolutionary processes.”

These protections were recently affirmed in a suit brought before Ecuador’s Constitutional Court, which ruled that mining activities in the Los Cedros nature preserve violated the protected area’s right to exist. Brunner welcomed the ruling as a good example of “giving teeth to the rights of nature.”