Sustainable Giving at the Undergraduate Level 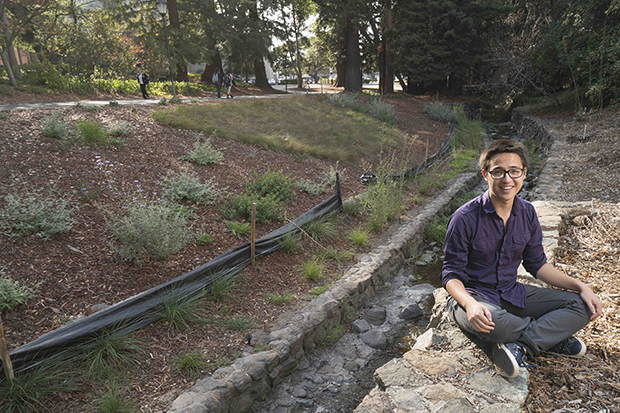 For Jimmy Dunn, who will graduate with a BS in environmental sciences in 2016, giving back to the College of Natural Resources is an act of sustainability. “I received a call last summer asking me to donate to the Senior Gift Campaign,” he remembers. “I had to think about it for a long time—it was tough to consider making a gift when I have so many student loans to pay off.” But because he had been doing work-study in the College’s development office, he knew the importance of philanthropy—and that there was a Student Hardship Fund. “I’ve received a lot of financial aid,” he says, “so I figured it was not so much about me giving money back to the school, but rather taking a small part of my own financial aid and recycling it. It felt like a sustainable approach to giving.”

Since coming to Cal in 2012, Dunn hasn’t let the grass grow under his feet. As a freshman, he took a work-study position in CNR’s Office of College Relations, and he ended up staying for two years. He also worked as an undergraduate researcher at the Mills Lab and serves as chief of staff to ASUC senator Wes Adrianson, advising him on the development of six departments geared toward environmental justice and sustainable infrastructure on campus. He also went to work for The Green Initiative Fund (TGIF), where he currently serves as campaign lead. As of last spring, TGIF had distributed over $2 million to more than 140 student-initiated projects, including the Sustainable Algae Bioreactor, Soil Remediation Education, and Lawns to Meadows projects.

“It was taking a small part of my own financial aid and recycling it ... a sustainable approach to giving.”
— Jimmy Dunn

“Getting paid to work in environmentalism is super-important to me,” Dunn says. “As a self-supporting student, my finances come first, and I would have taken any job I could get. So I’m lucky that I get paid for the kind of work that really interests me.”

When it came to choosing a field of study, “I knew I wanted to do environmental work, but there were about 10 different majors in that field, and I felt overwhelmed,” he says. At first the interdisciplinary aspect of the environmental sciences major meant “lots of big lecture classes across campus.” But once Dunn began taking courses such as Energy and Society, his enthusiasm for the field took off. He’ll complete his thesis, “U.S. Subnational Ecological Footprints,” in May 2016.

Before he even walks across the stage to receive his diploma, however, Dunn is well aware of the importance of giving back to the College of Natural Resources, particularly to the Student Hardship Fund. “Undergrads can show that they’re already invested in the future of higher education,” Dunn says. “We need to ensure that the Berkeley experience is available to students of all socioeconomic backgrounds.”

Student Giving Is on the Rise

For the past few years, UC Berkeley, in collaboration with CNR, has been conducting a Senior Gift Campaign, inspired by the success of such campaigns at private peer institutions. You’ll see from the following numbers that student philanthropy is catching on. With overall alumni giving at 12 percent, our seniors are raising the bar!