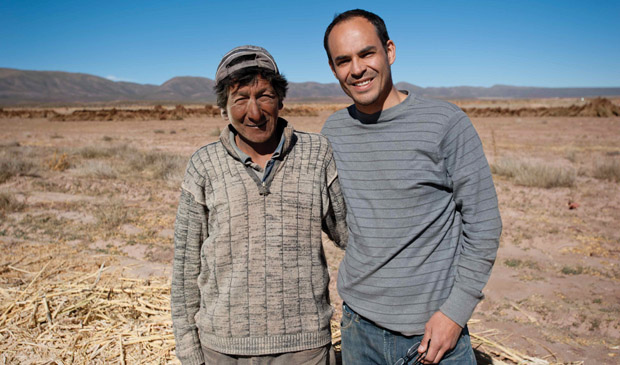 In November 2013, Time magazine devoted a cover story to “thirteen gods of food... people who influence what (and how) you eat.” Among the top-flight chefs, food activists, and cookbook authors was Sergio Núñez de Arco, an energetic, 40-year-old Bolivian-born entrepreneur who makes his home in the Bay Area. Time grandly dubbed him the “king of quinoa,” but Núñez prefers a broader identification. Although he makes his living as a distributor of this ancient pseudo-grain (it is in the goosefoot plant family, which includes beetroot and spinach), he is also, and more proudly, a champion of the indigenous people of his homeland who have raised this ultranutritious, gluten-free, biodiverse crop for centuries. And now their traditional knowledge, boosted by modern technology and market forces, is providing 45,000 Bolivian farm families a better life. 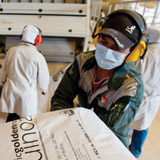 Quinoa grows best in harsh conditions, like those in the altiplano of the Andes, where elevations are between 8,500 and 12,500 feet, temperatures are severe, rainfall rarely amounts to 8 inches, and soils are full of salt. The people here live in dispersed communities, each comprising 30 or so families. “A farmer usually wakes up at 4 to 5 o’clock to get out and herd his llamas, which provide the fertilizer for the quinoa,” Núñez says. “After that, he’ll go help with the harvest, which is completely manual.” They plant in September, harvest by April.

In 2007, Bolivian quinoa farmers were making $45 a month; now their monthly income is between $400 and $600—thanks in large part to Núñez, though he demurs. “It’s not one of those ‘here’s a handout’ kind of things. It’s them lifting themselves out of poverty. It’s a really cool story.”

The story begins, in a sense, in 1991, when Núñez enrolled at UC Berkeley. “I knew I wanted to work in poverty alleviation somehow. And I went to the College of Natural Resources because I love nature, too. So my idea was, how can we alleviate poverty but not exploit the environment? Mining is out of the question. But, sustainable agriculture?” Alain de Janvry, a professor of agricultural and resource economics, suggested that he take some archeology classes. “‘How could empires like Tiwanaku feed thousands of people,’ de Janvry asked me, ‘when now Bolivia is the second poorest country in the hemisphere with rampant malnutrition?’ He encouraged me to link this heritage and existing social structures to bring about development.”

After earning his bachelor’s degree, Núñez returned to Bolivia for seven years and was eventually hired by a development group to do market penetration strategy for quinoa. There, he found his niche as he began to interact with the farmers themselves and to realize the grain’s potential on the world commodities market.

“What we’re seeing here is the birth of a new commodity, which is even more rare than Halley’s Comet. It’s a real discovery: a staple.”

In 2005, now back in the United States, Núñez started supplying 25-pound bags of Bolivian quinoa to small health food stores. He quickly realized that he would have to think more ambitiously. “The first big step was buying our first container of 20 tons,” says Núñez. “In every truckload, there’s a year’s product from 20 families. We targeted six truckloads that first year. Today, we sell almost 37 truckloads a month—740 tons—which is minuscule in terms of the commodity market, but it’s still bigger than wild rice.”

He took another leap in 2010 when he and several partners (including his brother Fabricio, a UC Davis graduate) set up a factory in La Paz to process quinoa. “There’s no off-the-shelf equipment. We had to adapt equipment to clean quinoa properly,” explains Núñez. They wash it free of tiny stones and twigs, remove the toxic powdery coating known as saponin, and sort the grains by color. It’s sophisticated equipment, run by indigenous workers. “The factory is impressive for people to see, and we wanted that, because pride for Bolivians is important.” It also provides “the same certification of food safety that a high-end U.S. factory would have.” 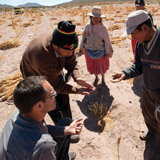 Regarding concerns that this success is pricing locals out of their traditional staple, Núñez says that farmers themselves continue to subsist on the grain, and city dwellers, typically, have never consumed it as a staple. A greater potential issue, he says, is the impact on native growers should production spread to regions such as China and India, causing prices to plummet worldwide. But for now, the benefits to his fellow Bolivians are quantifiable as altiplano communities enjoy improved health, education, and opportunity.

“What we’re seeing here,” Núñez says, “is the birth of a new commodity, which is even more rare than Halley’s Comet. It’s a real discovery: a staple. A staple that’s actually going to take.” But even more than that, it’s a staple that has proven “how it’s possible to bring about poverty alleviation through smallholder family farm development and sustainable, mainly organic agriculture.”